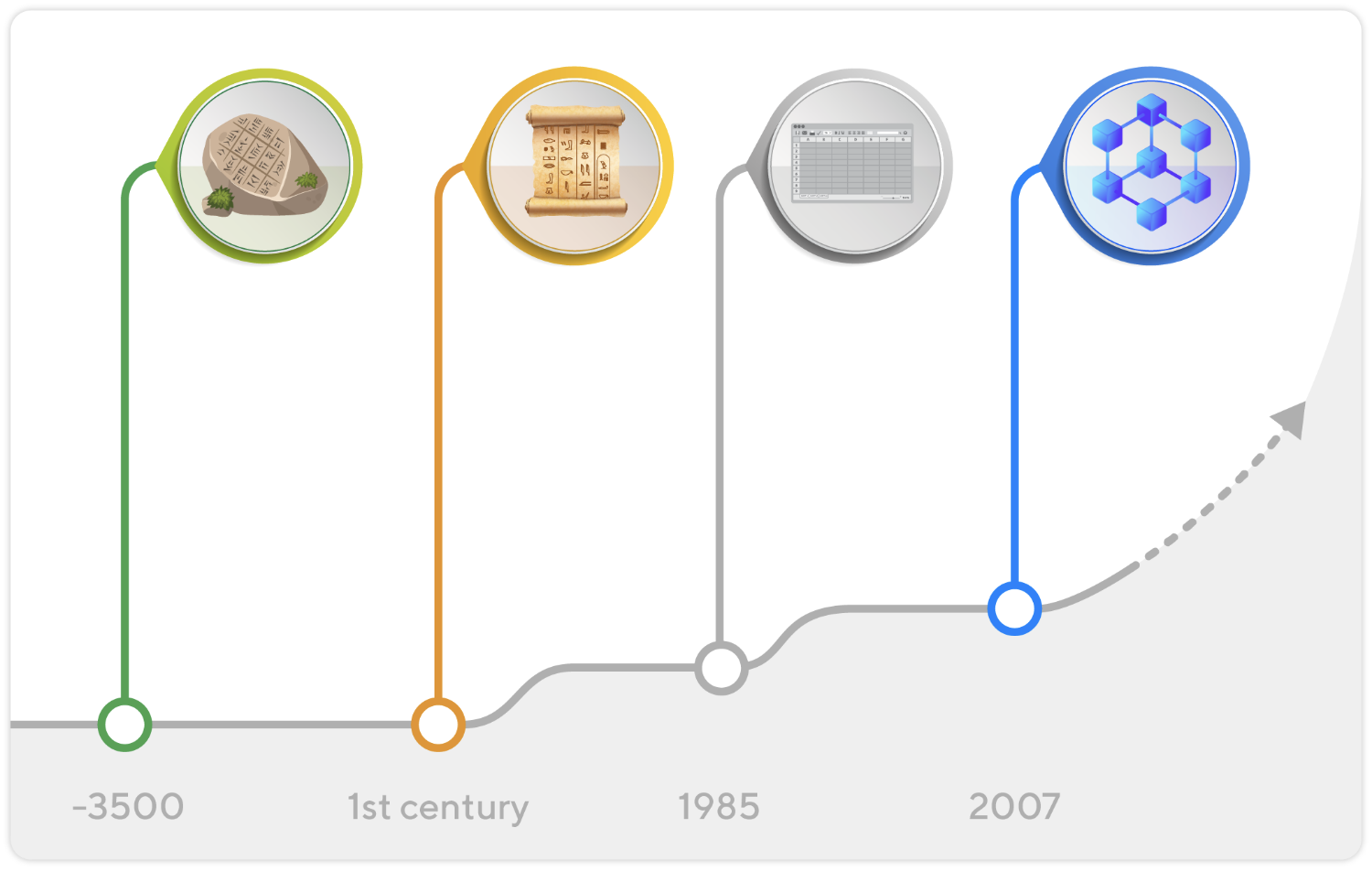 From Stone to Blockchain registers: evolution of accounting systems

How accounting systems have evolved from stone to blockchain?

The share ledger is an essential register for all shareholding companies; it lists all transfers of shares that have taken place (assignments, donations, contributions of shares) and any other type of securities (shares, bonds, etc.) that may be issued by a company.

These ledgers are the core of Equisafe’s services. To put things into perspective, we have found it useful to retrace the history of registers through the millennia to demystify blockchain and the mythical “Token”, this unit of value and accounting reading.

Record keeping has hardly changed since Mesopotamian times. Indeed, it has simply gone from the clay tablet to the papyrus, then evolved into a simple notebook to finally dematerialize itself in the form of an Excel spreadsheet. The manual keeping of such ledger is time-consuming and tedious. It leads to reduced efficiency, which implies a risk of error with regard to all the stakeholders listed in this register and the diversity of what can be entered in it. How can the register be developed? Why has it been in existence for so long? What uses has each of these mediums reinvented? Here is a chronology.

Contrary to what one might think, accounting was not created as a result of the invention of writing, but rather the other way around. Writing stems from accounting, first traces of which can be found in 3,500 BC. Human being needed to carry out counting operations, and it was these that gave rise to the very first forms of writing. This writing was used in the registers of the farms that stored the food surplus produced. This made it possible to follow the flows by keeping up to date shelves on which the receipts and issues of goods were recorded.

It was an unique non-reproducible handwriting. Collaboration was impossible but did not affect its effectiveness, because the use was then simple and codified.
‍

Paper was invented in China around 100 A.D. Since then, manufacturing techniques have evolved and there are many more variants, but uses have changed little. Paper is still widely used, especially in the keeping of share ledger. Most companies still keep their share ledger in 2020 on a small tile notebook, at home or in the safe of their lawyer or accountant. This is still used today for original deeds.

In addition to being time-consuming and tedious, tracking an ACR through paper can lead to a number of limitations. This technique requires a flawless organization to keep the register up to date and its consultation is not instantaneous. Moreover, the information is centralized, which makes collaboration very limited because a person can only access it from where the registry is physically located.
‍

Excel was created in 1985 by Microsoft, it was a major breakthrough in many fields such as management, finance, or logistics. Excel allowed to democratize the analysis of information by creating a tool as easy to use as possible.

Excel is a powerful tool that allows to compile large amounts of information. Writing is reproducible and it is possible to add formulas to analyze data and automate some basic processes.

However, the uses of Excel are limited. Indeed, the file can be shared but collaboration is difficult because of the static nature of the data. In addition, the computer security of Excel spreadsheets is average. It is possible to falsify or backdate an Excel spreadsheet easily. The information is easily readable for a “hacker”, even more so if it is saved on a low-security server. Finally, an Excel spreadsheet cannot be used as evidence in the event of a dispute, it is not recognized as opposable evidence for all the reasons mentioned above.

The history of paper, handwriting, and record-keeping are interrelated as they all allow for a standard of accounting. With the increasing complexity of writing and the growing need to secure exchanges, new disciplines have emerged and have been perfected, such as cryptography. The latter makes it possible to meet the needs of modern communication. It is from this discipline, combined with the rise of information technology, that blockchain technology was born, an immutable but digital, shared but encrypted, scalable and time-stamped accounting ledger. The first “blockchain” was conceptualized by a person (or team) known as Satoshi Nakamoto in 2008. This person (or group) is part of the “CypherPunk” movement, which advocated an uncompromising vision of privacy, at the time of internet construction, and the transparency of monetary institutions. This movement sought to democratize the use of cryptography and apply it to the currency, Bitcoin. Thus, many uses have emerged since then, with the sharing of value as a central focus.

The fields of application of the Blockchain are almost infinite, the management of ACR is a new one. The cryptography, a major component of the blockchain, intrinsically contains the components necessary for the secure, fast, and transparent management of a share ledger. Today, the blockchain technology makes it possible to automate and secure the process of keeping this share ledger, which is then time-stamped, tamper-proof, and traceable. The blockchain also makes it possible to execute a smart contract, a predefined computer program for different situations. This contract is executed automatically, unlike Excel formulas which have to be entered manually. Finally, the blockchain is now recognized in France, and in many countries, as a form of legally enforceable evidence.

Thanks to technological improvements, communication means and their uses have evolved considerably. Furthermore, tokens introduce a new way of understanding accounting and value measurement. A token is now a new unit of value that is secure and instantly exchangeable. This will then encourage still traditional fields, such as real estate, to adopt its use. The blockchain is a hybrid technology resulting from the evolution of our communication and information exchange needs. By combining transparency, security, trust, and speed, it is the most suitable means of holding a company’s share ledger. Keeping this ledger in its current form (Excel or paper) is only Darwinian. However, a fraction of companies has had the foresight to seize the opportunity offered by the blockchain so far. The technological breakthrough has taken place. It makes, day after day, the methods used for almost 7,000 years a little more obsolete.
‍

So how can we take advantage of the obvious benefits of the Blockchain?